In the following we describe a modern practical technique for network modeling and visualization. The modeling methods discussed here are intended for network education, research, and optimization. They are not intended as a replacement for network management modeling languages such as YANG. The goal here is to minimize the amount of time spent on learning to model a network by keeping the modelling methodology as simple as possible while also supporting nearly arbitrary extensions modern libraries and tools.

All the models for network related entities given below are implemented with JavaScript Object Notation JSON. JSON is a standard, text based, data exchange format which is easy for both humans and machines to process and is supported (internally or via external libraries) by almost all programming languages. To formalize and validate our models we use JSON schemas. However, users can safely ignore the formal schema and just follow the given examples or the output from the example code on this website or from our communications network visualization (ComNetViz) web app.

To visualize networks and their associated entities such as paths, user demands, link bandwidth, etc. we utilize the Scalable Vector Graphics (SVG) standard supported by all modern web browsers. This graphics format is preferable to GIF, PNG, or JPG in that individual graphic objects within a figure can be styled or manipulated (with the help of CSS or JavaScript). For example in Figure @fig:NetworkSVG the path {N2, N4, N5, N6} was highlighted in red just by changing an SVG class attribute on the links of interest and setting the color for those "highlighted" links via Cascading Style Sheets (CSS). This network is used on another page to illustrate the "scheduled backup" combined network/compute optimization problem.

The JSON network format we use to save and share network models is based on that used in the NetworkX open source Python graph library. NetworkX provides a wide variety of very useful graph data structures and algorithms as well graph I/O facilities. Important Note: this format we use here and used by NetworkX has changed! We have moved to new format described below and compatible with NetworkX 2.x as of 2018.

In code fragment 1 we show the JSON representation for a network consisting of nodes named [N1, N2, N3, N4] connected by the links (N1, N2), (N2, N4), (N3, N4). We see that the representation consists of a list of nodes and a list of links. One subtle aspect of the NetworkX representation is that the "source" and "target" attributes for a link is given by the position of the corresponding node in the "nodes" array and not by the node's identifier.

To model and draw networks we typically want to associate more information with nodes and links. For the network shown in Figure 1 we need (x, y) coordinates for each node, the node type, e.g., data center or switch. For the links in Figure 1 we want capacity and weight parameters. In addition, since this network is used to specify a network/compute optimization problem, we added problem specific data such as cost or demand associated with a data center. In code fragment 2 we show how these node and link attributes can be added to the JSON representation.

Code Fragment 2. JSON graph representation for the network of Figure 1.

The nice thing about JSON and the NetworkX JSON network representation is that we can add arbitrary attributes to the nodes and links in a network and these extra attributes can be used or ignored in any subsequent processing. Below we summarize various attributes that we currently use in our network modelling and associated algorithms. For more detail see the examples, in addtion our formal network JSON-schema can be found in the file netSchema.json.

For some network optimization problems we start with a set of traffic demands between network nodes. Such demands can easily be represented via JSON as shown in code fragment 3. In Figure @fig:NetwDemands we show a visualization of these demands on an extremely simplistic network. The demands are shown via grey lines between nodes. In this visualization the thickness of the demand lines and the links is roughly proportional to the demands between the nodes and the link capacity respectively. The JSON for this network is given in code fragment 4.

As shown in Figure @fig:DemandDialog sortable tables are useful for visualizing demands. The JSON schema for our demand format is available in the file demandSchema.json.

The output of many network optimization algorithms includes a path or a set of paths. Visualizing these paths can be key to understanding and/or verifying an optimization or algorithm. The key information about a path is the sequence of nodes that it traverses. Hence the key element in our JSON model for paths is a path list (pathList) and within each path in the list we have a list of nodes (nodeList). This can be seen in an example of our JSON based path model shown in code fragment 5.

Depending on the algorithm that generated the path set one may want to keep other information with each path. The paths in code fragment 5 were the outcome of a batch network optimization procedure known as a multi-commodity flow problem. In this problem we seek to find multiple paths between various source and destinations that will satisfy the communications demands within the bandwidth constraints of the links and with over all minimum cost. Hence, the JSON path representation of code fragment 5 includes a cost, load, and ratio information for each path. The "ratio" information is the percentage of the overall demand traffic between two nodes carried by the path.

In Figure @fig:PathTable we show a screen capture of a dialog box from our web app used to sort and select paths for visualization based on this information. Note that in networks with parallel links, i.e., a multigraph, one would need to identify specific links rather than a list of nodes. However we currently model parallel links as an aggregated link (like Ethernet link aggregation groups) rather than using a multi-graph. The JSON-schema for our path format is available in the file pathSchema.json.

Code Fragment 5. JSON representation a set of paths with extra information specific to an optimization problem. 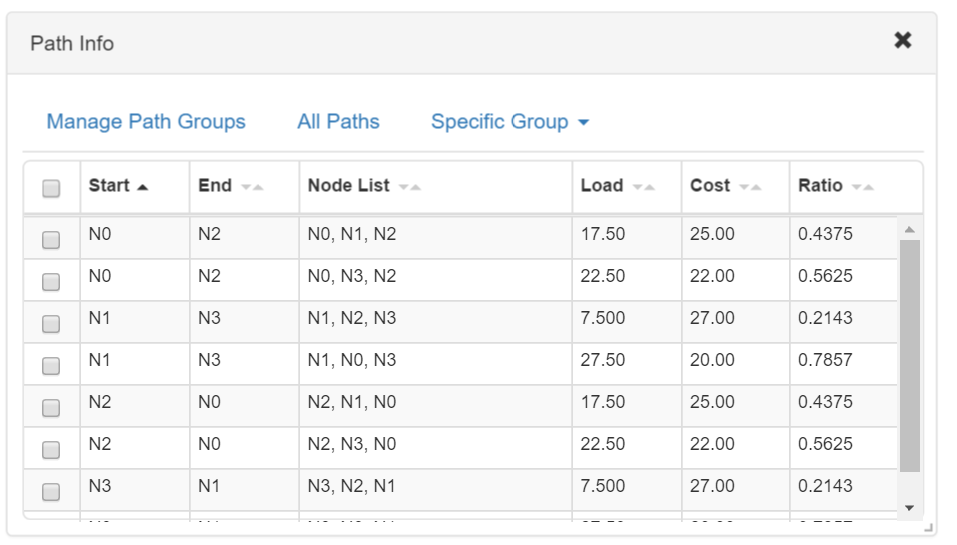 In code fragment 6 and Figure @fig:PathTable2 we show a group of paths with a different set of additional attributes. These paths were the result of a shortest path computation and include the path cost and capacity. This shows again how JSON makes it easy to give a path any useful attributes. In addition, our web app (ComNetViz) will pick up arbitrary path attributes and show them in a path table. 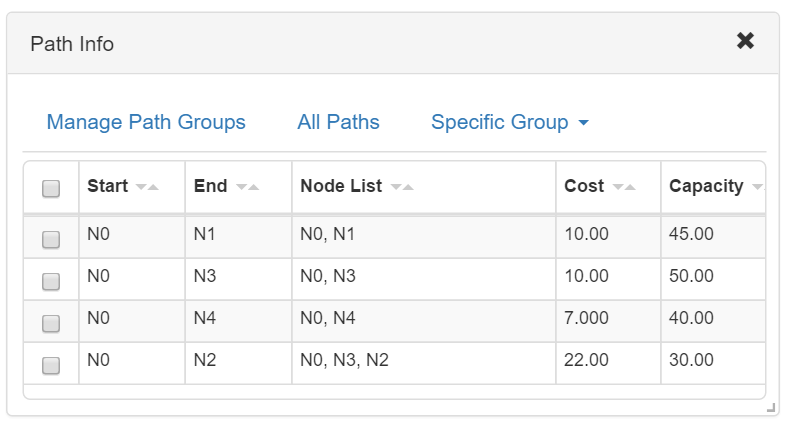 We encourage readers to give our web based "beta" communications network editor/visualizer ComNetViz a try. You can copy and paste any of the above network, demand, or path JSON models into ComNetViz or see below for more example network and path files.

We've shown how to model and visualize networks and various network related entities such as demands, paths, etc... and with our ComNetViz web app you can visualize the results of your network computations by either opening a JSON file or just load JSON strings into the application. However, for evaluating many test cases or for frequent updates it would be nice for the visualization system (browser) to talk directly to a computation server. In the "old days" a network student or researcher wouldn't never want to bother with the complexity of a client-server system, in this section we show how it can be done relatively easily with Python on the server side and our existing ComNetViz web app.

The ComNetViz app has just a few built in computation algorithms: (a) shortest paths (Dijkstra), (b) minimum spanning tree (Prim), and (c) widest paths (modified Dijkstra). A very useful path computation algorithm for network planning/optimization is a k-shortest path algorithm (finds not just the shortest but the 2nd shortest, 3rd shortest, ... k shortest path between two nodes). There are multiple algorithms in the literature for computing the k-shortest paths, however none of them are simple and although I've implemented one of these in Python, my code is not nearly as fast or general as the k-shortest path algorithm now available in the NetworkX Python graph library. Hence in this section we will show the techniques needed for a client-server based approach to k-shortest paths with nice web browser based visualization of the results.

The Key interface and implementation ingredients are: 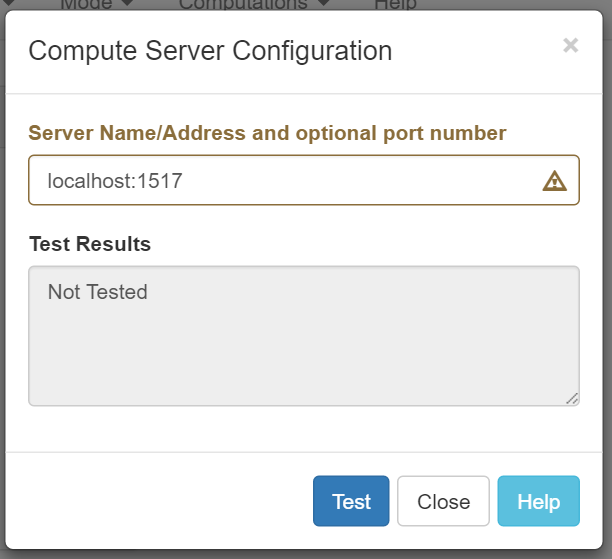 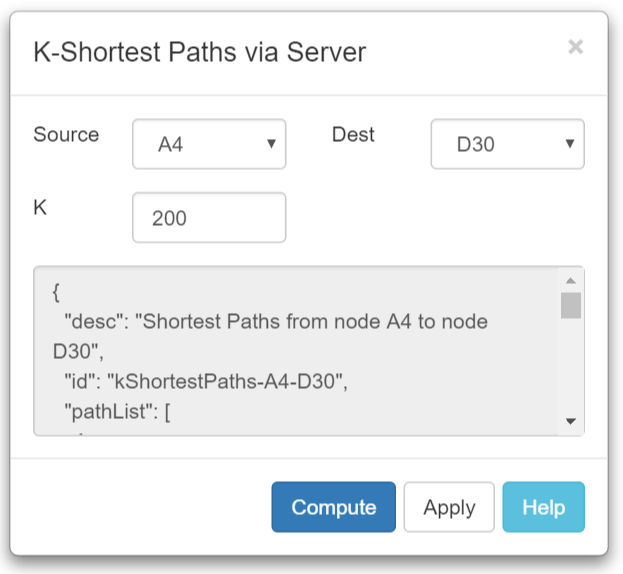 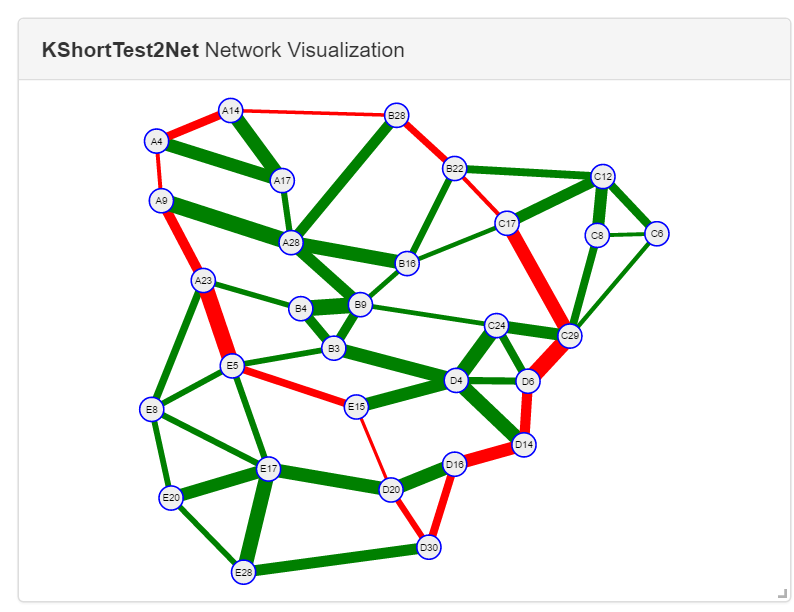